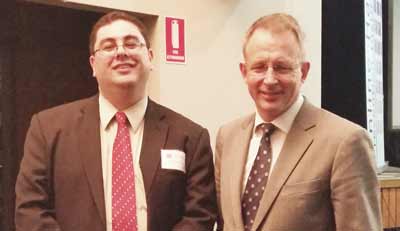 OHPI is a harm prevention organisation headed by Dr Andre Oboler which focuses on hateful and discriminatory internet content across a wide array of websites including social media and websites which serve as advocacy platforms.

Young people face an increased risk of facing cyber-hate including cyber-racism, as  many of them frequent the Internet.

Social media and popular meme websites have become accessible platforms for perpetrators to spread hateful messages. These perpetrators, often referred to online as trolls, are often characterised by a lack of education or understanding of the groups they are targeting and are empowered and protected by the anonymity that the online platform provides.

Jumana Harris, representing the Muslim Women’s Association said that social media has given a platform to bigotry and harassment adding to the demonization of Muslims which has steadily increased over the last decade, further tearing at the social cohesion of our multicultural communities.

The hijab visually represents Islamic identity causing Muslim women to face the vilification, the ignorance, the abuse and the harassment which extends from online to physical forms.

Young activist, Talitha Stone had the following to say about the online experience for many women.

“When you speak out about violence against women or challenge the culture that sexualises women in any form, you are immediately inundated with barrage of rape and death threats. The trolls are crossing the line with the acceptable treatment of people. If they said things to someone on the street they’d be arrested but because it’s online, there’s little to no consequences for their actions”.

Julie Nathan, research officer at the Executive Council of Australian Jewry has recently published a report on Anti-Semitism in Australia in 2014.

Her report supports the concerns raised by her fellow panel members regarding the nature of various online platforms and how they can exacerbate the nature of online hate targeting particular groups.

According to her findings, there are websites that are not openly racist but still contain racist and anti-Semitic content, including some political activist networks. Some of these websites have since taken down their content and changed their online policies following intervention from ECAJ, however there is still work to be done, especially, with Anti-Semitism flowing more steadily into mainstream media.

This is where OHPI’s new software comes in.

The software itself works through a reporting system, and various organisations have access to a register where they can input various data they encounter that can be classified as hateful online content. They simply choose the type of hate from the options listed, and filter through further criteria until they submit their final reports into the system. The system then tracks these reports all in one place. This way, online hate can be tracked globally and on a consistent level and can be reported by various groups who are vulnerable to online hate and bigotry.