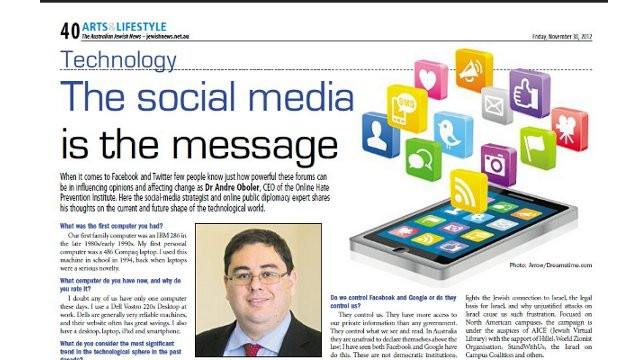 Social media is the message

The following is an extract from a feature article in the form of an interview with OHPI’s CEO, Dr Andre Oboler, in the Australian Jewish News on November 30th 2012 (page 40).

The social media is the message

When it comes to Facebook and Twitter few people know just how powerful these forums can be in influencing opinions and affecting change as Dr Andre Oboler, CEO of the Online Hate Prevention Institute. Here the social-media strategist and online public diplomacy expert shares his thoughts on the current and future shape of the technological world.

We hear a lot about the use of social media in political and social campaigns, but just how influential is it?

For the under-30s, social-media campaigns are very important. For the over-30s, they gain significance when the mainstream media takes note of the campaign. In the US election campaign, within “race” classifications, there were clear splits between under-30s and over-30s in the exit-poll data. I can’t help but suspect socialmedia campaigns are amajor factor in the result.

One aspect of your work is combating online racism. Just how prevalent and how dangerous is online hate?

Online hate leads to real and serious health impacts. There are the obvious cases, such as online bullying or homophobia that lead to suicide, but general racism and hate targeting groups in society also have an impact onmental and physical health.

Hatemakes people feel unwelcome in a society, including online platforms and online communities. For many people, particularly young people and those under 30, losing their connection to online society cuts themoff fromfriends and support structures.

In 2012,we have seen an explosion of people seeking to spread hate and bullying for fun. This is not always a result of hard-core racism, but often closely related to the sort of stupidity we
previously saw in the planking phenomenon.

Do we control Facebook and Google or do they control us?

They control us. They have more access to our private information than any government. They control what we see and read. In Australia they are unafraid to declare themselves above the law; I have seen both Facebook and Google have do this. These are not democratic institutions, we the people are their assets, not their patrons.

See the full article: ‘Social Media is the Message’ in the Australian Jewish News