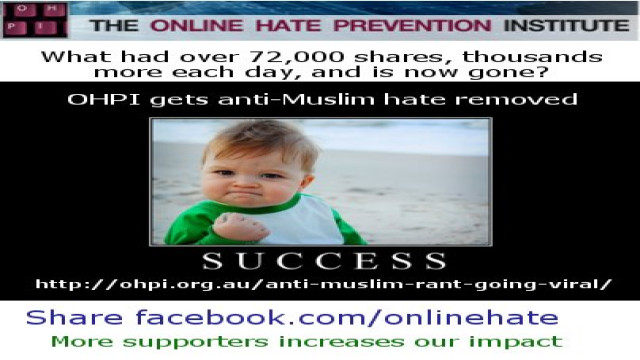 An Anti-Muslim rant falsely attributed to Julia Gillard, and exposed by Snopes back in January 2013,  went viral on Facebook in July 2013. After a successful campaign by OHPI, and the help of our online supporters, the content has now been removed.

OHPI monitored the content as it grew from 61,000 shares to over 72,000 shares in a few days. We reported the content ourselves and ran a campaign encouraged others to do the same.  We also drew this content to the attention of those we work with including the Australian Federal Police, Victoria Police, the Youth Committee of the Federation of Ethnic Communities’ Councils of Australia, and in this case, the Islamic Council of Victoria.

Our briefing on this topic had two parts which are archived below: As the Snopes article (which includes the full text of the post) makes clear, the overall impression of this falsely attributed content is that Muslim are unwelcome in Australia. While the words themselves don’t cross into an attack on Muslims, they define Australia and being Australian in a manner that is frankly un-Australian and which stands in sharp contrast to the multiculturalism that is a strong part of the Australian identity.  This is  not surprising given most of the text is lifted from an American article with slight language changes.

The one point which does directly target a group of Muslims is the line: “Muslims who want to live under Islamic Sharia law, were told on Wednesday to get out of Australia, as the government targeted radicals in a bid to head off potential terror attacks.” This line draws on the imagery of Muslims as terrorists and objects of fear. It mixes the idea of theological radicalism with that of militant radicalism. Most significantly, it seeks to give permission to readers to single out Muslims for special treatment; it does this through the supposed authoritative example of the Australian Prime Minister (at the time this first circulated).

The passage as a whole should be offensive to all Australians, both for its content, and for the manner in which it seeks to attribute this hate to an Australian leader who until very recently represented Australia on the international stage.

OHPI encourages Facebook to remove the content. It is clearly falsely attributed, as Snopes has reported, and it tarnishes the name of Australia’s former Prime Minister. This alone should be enough to see it removed. The viral spread of this post, currently at about 80 shares an hour, has the potential to raise tensions in the community and contribute to a break of the peace.  As the material is falsely attributed propaganda, keeping it online serves no useful purpose.

OHPI will be reporting on this incident in our next report which will focus on Hate Against Muslims. We note that the original poster on Facebook that is causing the current problem is a lady living in the Philippines. Though strongly impacting the Australian community, this hate originates outside Australia’s borders. It is in all senses of the word, un-Australian.

The post is attached to a photograph. To report it, you need to report the photograph.

5. Tick the box to report it to Facebook, you don’t need to select either of the options above

6. You will receive a response that your report has been received and you can track it’s progress on your dash board