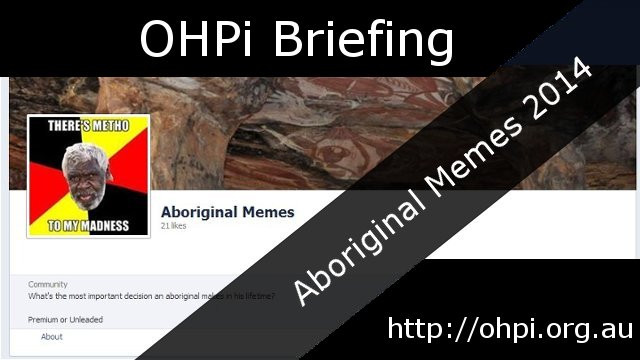 The “Aboriginal Memes 2014″ Facebook page was created on January 9th 2014 and was unpublished by Facebook on January 27th. Facebook had initially been rejecting reports users made about the page, but reversed their position after a journalist from News Corp contacted the company for an explanation. This incident against highlights that Facebook’s internal mechanisms for handling reports users make are ineffective, it is only when external contact is made and there is a possibility of serious averse publicity that swift action follows. We’re please to see Facebook was able to resolve the matter quickly, but remain disappointed that the reports made by users about serious hate speech continue to be largely rejected by Facebook staff. We’ve expressed this view in a media statement about this incident. The Aboriginal Memes 2014 page also linked to other Facebook pages related to ethnic and religious humor in it’s about section. Some of these other pages contained hate speech, such as the “Jew Memes”  page, and others were free of hate speech but contained ethnic humour such as the “Muslim Meme” and “Mexican Memes” pages. OHPI rejects the idea that racism becomes acceptable if it is presented as humour. We also recognise that not all ethnic humour is racist. Both Facebook and the creator of the “Aboriginal Memes 2014″ Facebook page appear to have difficulty understanding the distinction. Hate speech involves negative stereotyping of groups in society or the incitement of hate against those groups. Culturally sensitive jokes which do not present a minority in a negative light are not hate speech. Facebook needs to get better at identifying hate speech when users first report it; the question of whether an attempt at humour is involved in the content is simply irrelevant to that evaluation.

Facebook has ultimately taken the Aboriginal Memes 2014 page down in good time and should be congratulated for that. In the past it has often taken months to get content reviewed after Facebook staff initially deemed it acceptable. The fact user reports were initially rejected is however still cause for concern. Racism works by spreading messages of hate with in society. When Facebook sends a message that a report is not a breach of their community standards, that sends a message that the content is acceptable. Racism excludes people form society, and Facebook’s messages rejecting user reports compounds that exclusion.  We urge Facebook to take a little longer reviewing content and to ensure they get it right the first time. It’s not just the end result which counts, but the message that is given during the process itself. Copies of some of the page’s content remain online on other Facebook pages such as “Aussie Bogan Memes“. Facebook needs to take action to remove these as well, or better yet, the administrator of that page (and other similar ones) could remove such content themselves and try and stay on the right side of the line when it comes to have a laugh, but avoiding racism. From that page’s posts, however, it seems unlikely the administrators will act responsibly in this particular case, the content appears to have been posted with full awareness of its racist nature.

OHPI is  developing software which will allow people to report online hate such as this to our system as well as to Facebook. This will allow OHPI and other partners to monitor the amount of hate that exists on platforms such as Facebook, how long it takes the platform to remove hate, and to track how common different forms of online hate are at a given point in time. This will allow the public to play a more active role is holding companies like Facebook accountable. Details of the project were announced in OHPI’s newsletter in November last year and work is currently progressing well. We aim to release the first stage of the software in April.