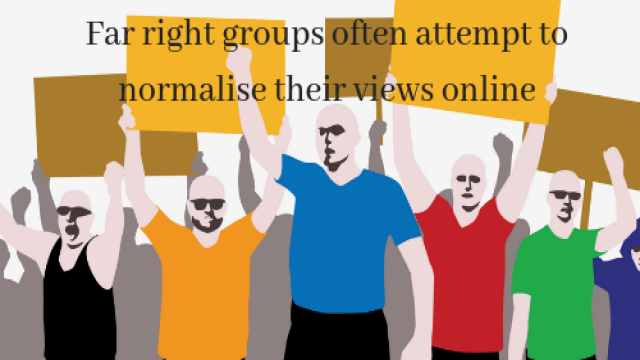 As part of our campaign on monitoring far-right groups in the lead up to Australia day we highlight one of the tactics of the far right is to claim that they are not actually far right and that their views are typical of normal every day Australians.  In this way they hope to appeal to a wider audience of people.

This was evidenced in a recent post made on our Facebook page where a commenter, who was unhappy with our approach to calling out the racism of the far right, accused us of only putting forward one point of view.  He argued that we should also be taking into account his view about the issue of bigotry from Islam towards non-Muslims because he is a “centre related person”.

On the surface this may appear reasonable and Australian’s may be influenced by his claim to be non biased, but a closer inspection shows that he follows and likes many groups who have far right agendas.  These are groups that have extreme views about nationalism that are at odds with Australia’s Indigenous and multicultural history and that may also be racist.

This particular poster follows many groups that claim to be protecting Australia from unwanted immigrants and also many anti-Muslim groups.  Some of the more prominent groups he follows include –

Soldiers of Odin Australia who claim to be patriots patrolling the streets and protecting our citizens from harm. Posts on their page demonstrate hate towards African’s and promotion of the St.Kilda rally, for example this post –

The attempt to popularise these far right views and claim that they are normal or centre rather than right is a concerning trend in the lead up to Australia Day and upcoming briefings will explore this in more detail.