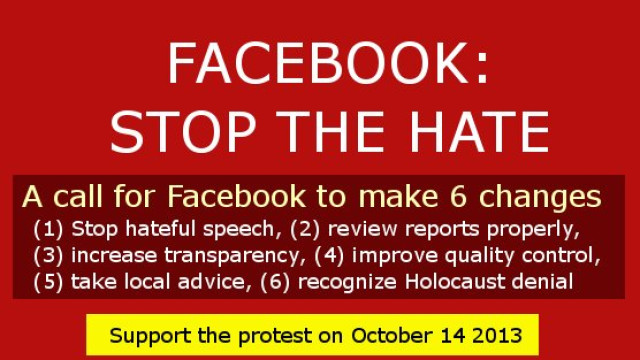 OHPI is supported the October 14 Protest outside Facebook HQ. We’ve worked with the protest organizers to create a call for change which is both beneficial to the efforts to stop hate on Facebook and can be realistically implemented by Facebook. Please join the protest if you can get there, and sign the petition with the call for change so it had more support when it is delivered to Facebook at the protest.

Why: To call on Facebook to do more to stop online hate

The call for change:

We believe Facebook is one of this century’s most important communications tools not only in the United States but globally. We believe Facebook Inc has a social responsibility to run the Facebook platform is fair and transparent manner. We commend Facebook for prohibiting Hate Speech in its terms of service, but feel this does not go far enough. We also believe that the current provisions against hate speech are not seriously or effectively enforced.

c) Additional fresh assessments should occur periodically (based on elapsed time or volume of complaints) and at each point of escalation a more senior Facebook staff member should review the reports.

d) It should be possible for a sufficiently serious complaint (relative to other complaints) to rise all the way up to the CEO and board for final determination if it is not upheld earlier and keeps being reported by a significant number of users.

This call for change was developed by Dr Andre Oboler of the Online Hate Prevention Institute and Michael Mendelson of the 14 October protest organising committee. Individuals can show their support by signing this petition and joinging the protest. Organisations can endorse this call for change by e-mailing Michael Mendelson at  rhatepages@yahoo.com