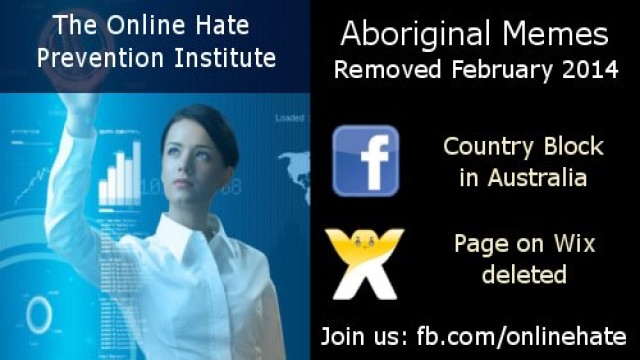 Over the last few days the Online Hate Prevention Institute has been in contact with Facebook and Wix (a company offering do it yourself websites) over another lot of racist content directed against Indigenous Australians. As before the new content focused on “Aboriginal Memes”. Following contact by OHPI, both Facebook and Wix promptly took action against the hate speech on their platforms, in line with their prohibitions on hate speech. In Facebook’s case the content was blocked for Australian users, but it remains online for users outside Australia – we encourage Facebook to go one step further and delete the page entirely. The Online Hate Prevention Institute thanks both companies for their prompt action.

A Facebook page “FunnyAboMemes” (ID# 534831416587129) was promoting racist content in the form of Aboriginal Memes and racist statements from the administrator. The page claimed it was meant as a joke, and therefore isn’t to be considered racist. Labeling something as humour does not give it an exemption from being racist. It does not make it suddenly “ok”. Those trying to mask their racist as humour, or in any other way, are still just racists. The page had very few supporters.

Some of the content on the new page is well known to OHPI and was documented in our report “Aboriginal Memes and Online Hate” back in 2012. Other content is new. The image below is not only racist content, it is also a copyright violation as the key photograph in this meme is copyright and being used without the authors permission. This makes it unlawful not only in countries with laws against racial discrimination, like Australia, but unlawful in the United States. The text posted by the page administrator also denigrated Indigenous people and makes light of violence against them: The Facebook page also announced the creation of a new page on Wix, a do it yourself website building platform.

Not only is the page promoting racial discrimination, which is unlawful in Australia, the content also breaches Facebook’s Community Standards as it promotes hate speech. We are please Facebook blocked it in Australia so soon after we notified them of it, but as it breeches their terms of service we do ask they go the next step and permanently close the page.

The Wix page was at the address “aboh8r.wix.com” (Abo Hater) and contained more Aboriginal Meme images as well as a page of racist jokes and a link to “complain here” which simply gave an e-mail address. Presumably the complain link was there to capture and then publish the names, e-mail addresses and messages of those who wrote to it, as well as distracting people from the reporting capacity on Wix itself. The images on the Wix page were largely recycled from a range of previous Aboriginal Memes pages. The “jokes” display an extreme level of racism and dehumanization. The terms of service at Wix state that users shall not upload content that is “HARASSING, HATEFUL, RACIALLY OR ETHNICALLY OFFENSIVE”, the prohibition is in capitals to draw attention to it. In line with this policy Wix responded to OHPI’s complaint immediately with an automated response noting it has been received.  They replied again, within 24 hours, saying that: “The site was deleted from our servers”. The second message by signed with the name a staff member, and on checking, the content had indeed already been removed. Reporting content to Wix was one of the most straightforward systems OHPI has dealt with. Their response was also fast, accurate, and appropriate given their terms of service. We congratulate on their response and their processes. We wish the systems at other providers, such as those providing blogs, was as straight forward. Well done to Wix, and we encourage our supporters to take a look at them.

Update 16 Feb 2014: We updated our Twitter account with news of this briefing and Wix was kind enough to reply. If you have Twitter, please take a moment to favourite their reply. It’s great to see a platform provider taking such a positive and proactive response against hate speech.

@OnlineHate Glad to help & thanks for informing us on this. #FightWebHate