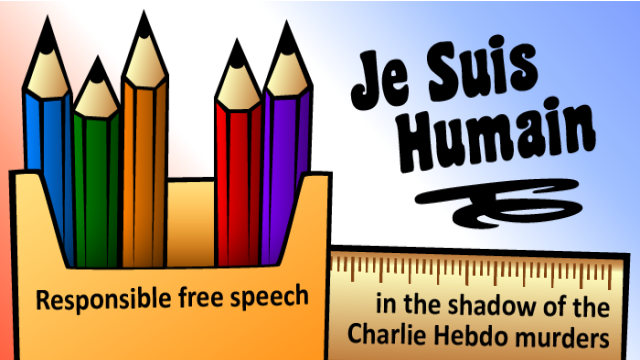 The attacks in January 2015 in France on the satirical publication Charlie Hebdo, a police officer, and a kosher supermarket, have sparked significant discussion. That discussion touches on issues of antisemitism, freedom of speech and expression, a free press, freedom from persecution, human dignity, bigotry, religion, blasphemy, self-censorship, and government censorship. Social media is enabling the masses to come together, to mourn, and to debate the placement of the often fine line between freedom of expression and respect for human dignity.

This report highlights the antisemitic aspects of the attacks in France and the need for a greater response, by both governments and society, to a problem which serves as a significant predictor of a breakdown of civil rights. Rising antisemitism in Europe, particularly within the Muslim community, has not been sufficiently tackled in recent years and this puts society as a whole at risk.

The report explores the different approaches to the line between freedom of speech and protection of human dignity, with respect to religion, in France and Australia. We differentiate criticism of a belief or philosophy, which must be permitted in a free society, from the promotion of hate against a people who follow that belief, a form of hate speech violating basic human rights. This is done both generally with respect to Islam, and in the context of cartoons of Mohammed.

We consider the line between freedom of expression and defending human dignity. We suggest speech attacking a person or group’s identity, and impacting on the public good of a socially cohesive society, should be unlawful. We suggest comments on a matter of public interest should, however, be exempt from censorship provided they are made reasonably and in good faith.

Australian’s debated the line between freedom of expression and racism extensively in 2014; we opted for the well established status quo. We argue it’s time those same widely accepted standards apply to attacks on groups defined by religion. Such a move is in keeping with Australia’s commitments under the International Covenant on Civil and Political Rights.

Please help us share this report more widely by using the social media share button at the top of the page.

This is said in response to those who argue for cartoons of Mohammed to be published widely in the media, and on social media, as a show of defence of freedom of speech after the attack on Charlie Hebdo. While we don’t believe freedom of speech should apply to hate speech (as it does in the US), where hate speech is legally protected, we believe a distinction must be drawn between supporting the principle of free speech and repeating the hate speech itself. When the American Civil Liberties Union (ACLU) defended the right of the National Socialist Party of America (i.e. Nazis) to march through the predominately Jewish community of Skokie (Illinois) in 1978, they didn’t dress up as Nazis as part of their support. The distinction between supporting someone’s speech, and supporting what they actually said is critically important. The treatment of social media

“Social media is enabling the masses to come together, to mourn, and to debate the placement of the often fine line between freedom of expression and respect for human dignity.”

This line depends on the culture of the society. It differs between countries, and can differ within a country depending on the context, venue and timing. What does this mean for social media platforms that operate globally, without much awareness of the local context? “The report also explores the placement of the line between freedom of speech and protection of human dignity with respect to religion in the French tradition, and the quite different approach which is appropriate in a country, such as Australia, which celebrates diversity.”

The boundary when it comes to the criticism of Islam, which like criticism of any other belief or philosophy must be permitted in a free society, and the promotion of hate against people who are Muslim, which is a form of hate speech violating basic human rights, is considered. This is done both in general and in the context of cartoons of Mohammed.

“The report considers where the line should be, in the Australian context, when it comes to the choice between freedom of expression and the prevention of attacks on human dignity.”

Our ultimate view is that the situation here is very different to France. We believe in multiculturalism, and that expressions of religion can be part of one’s self identity, and should not need to be suppressed in public. We believe that speech attacking a person or group’s identity in a manner that is not trivial but is rather profound, should be unlawful. We believe speech which impacts on the public good of a socially cohesive society should be unlawful. We also believe that comments on a matter of public interest should be exempt from censorship provided they are made reasonably and in good faith.

“Liberty on its own is not enough, equality and fraternity are needed too, and now more than ever.“ “The ‘Je Suis Humain’ hashtag, providing a universal message “I am a human”, started with the German rally in support of France after the shooting.”

It expresses a message against both terrorism and the divisiveness of the content of Charlie Hebdo itself.

“While the press has editorial controls, journalistic ethics, and regulation either through government or through self regulation such as a press council, social media can easily become a free for all.”

Only the terms of service and their application by the platform providers regulate what can and cannot be shared. If platform providers adopt lax standards, or fail to uphold their own community standards, a platform can quickly become a free for all where hate speech can go viral. Stronger limitations in the terms of service and community standards of social media platforms, compared to the mainstream media, are justified to prevent a viral spread of hate.

“This debate has brought people together across countries, cultures and religions, perhaps not to agree, but at least to engage in discussion.” “When hate speech and non-hate speech are mixed together in this manner, it increases the likelihood of the hate speech becomign socially acceptable.”