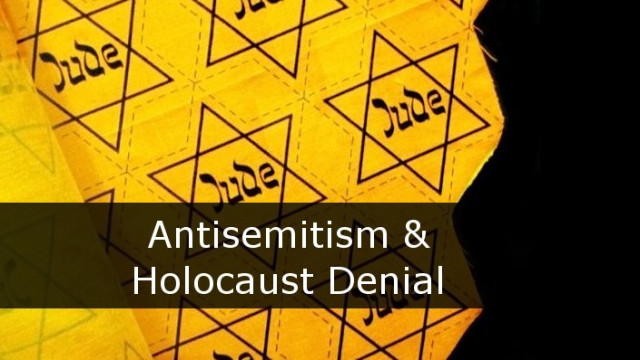 This is the first part of a series of briefings related to OHPI’s campaign video “Stop Racism and Online Hate with OHPI”. This briefing focuses on the six images in the video which related to antisemitism or the Holocaust. The images have each been recaptured from the video to show when they appear. The video can be seen here:

These images are all included in the OHPI report “Recognizing Hate Speech: Antisemitism on Facebook” which was published to coincide with the International Day for the Elimination of Racial Discrimination on March 21st 2013 and later distributed at the Global Forum to Combat Antisemitism in Jerusalem in May 2013. The report received international media coverage as well as significant coverage in Israel including from Maariv, Ynet, Jerusalem Post, Mako, and The Times of Israel.

After campaigning by OHPI, and formal complaints by the Executive Council of Australian Jewry, the specific content in the report has been removed, including the images in the video, have all been removed by Facebook. Unfortunately this is not the end of the story as other copies of the same content, as well as other antisemitic pages and images continue to spread on Facebook.

After providing a discussion of the images used in the video this briefing provides examples of duplicates of this content which are still online as well as a selection of antisemitic pages which still need to be removed. You can help OHPI take action by reporting these pages and images. This image was used on the cover of OHPI’s report “Recognizing Hate Speech: Antisemitism on Facebook“. It mocks the Holocaust and those who died with the depiction of Colonel Sanders in the KFC logo as Adolf Hitler and a reference to Kentucky Fried Jews instead of Kentucky Fried Chicken, but dehumanises Jews and making light of extreme violence against Jews. Multiple copies of this image have been reports, sometimes Facebook removes them and sometimes the reports are rejected. There appears to be no consistency. That any report of this image could be rejected is deeply concerning.

A report of this same image used as the profile picture for the page “[Controversial Humor] Three Jews walk into a bar, I lied it was a gas chamber” was made on April 30 2013 and was rejected by Facebook. The image and the page are still online at the time of writing as is another copy of the image here (from this page). This image was the subject of a poster campaign and a petition run by OHPI. The images features Anne Frank, one of the most well known victims of the Holocaust, and the message “What’s that burning? Oh it’s my family”, a reference to the burning of Jews in the crematoria after they were killed in the gas chambers at Auschwitz-Birkenau.

While OHPI’s efforts have led to exact matches of this image are being taken down by Facebook more consistently, variations on the theme still appear. For example, the image of Anne Frank with the text “This one time at camp we got so baked”, which again refers to the crematoria is currently on Facebook here (from this page). This image, take by OHPI from a Facebook page, was also used in posters in Belgium in March 2013. The posters using the image were for a debate on Zionism which was cancelled by Belgian Municipality in light of the image. The image was described by one law maker as “worthy of Nazis propaganda about the all-powerful Jew”, while another called it a “caricature that stigmatizes an entire community [and] is of course unacceptable in form and essence”.

The images shows a demon (note the pink skin, sharp teeth, and ears) wearing an Israeli army uniform with the flags of both Israel and the United States on the sleeve, and mask of an Orthodox Jew. The demon is tipping a scale of justice in favour of a single Holocaust victim causing it to outweigh all other forms of oppression and historical wrongs including slavery and the impact of colonial settlement on native peoples. The image not only demonizes Israel (and the United States), it seeks to relativise the Holocaust, a unique event in human history, and to reduce its significance. There is also the significance of suggesting that “the Jews” are all powerful and that wearing a mask of Jew would allow such manipulation of the Scales of Justice. At the time of writing, a copy of the image was still on Facebook here. This is another Jewish power conspiracy. The image shows an orthodox Jew driving a car whose steering wheel is the United Nations logo, while cropped in this presentation, the full image has US President Obama’s head as the shift stick. The image caused outrage in April 2012 when it was posted to the Facebook page of the “Occupy Tampa” movement on Israel’s Holocaust Memorial Day. According to the ADL, the image was published in Al-Watan, September 30, 2011 (Qatar). A copy of this image is currently on Facebook here. The next image trivializes the Holocaust with a picture of a concentration camp and a reference to “100% Concentrated” orange Jews. The pun is obviously on orange juice, but the uses of Holocaust imagery for such purposes is entirely inappropriate. A copy of this image is currently on Facebook here. We will continue this series by exploring other images in the video over the coming weeks. In the mean time, we  invite you to join our Facebook page, and to sign up to our mailing list. You can also support us by donating to our appeal and by supporting the Facebook protest.