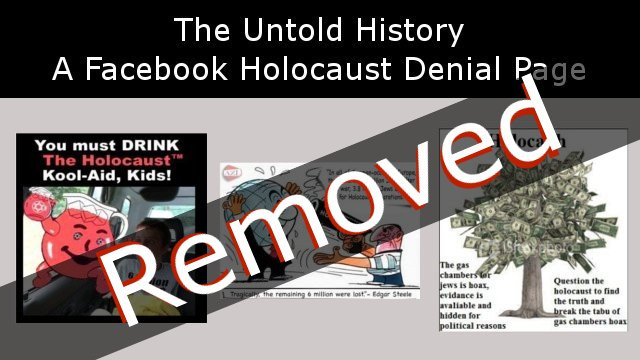 Some online hate is so bad that we stop our regular activity to see it removed. The Holocaust denial page “The Untold History” was one such page. Social media is a powerful tool and that power should not be used to take content like this viral.  Social media companies, that have such a major impact on our daily lives, need to behave in a socially responsible manner and to be held accountable when they fail to live up to the standards society expect.

OHPI was founded in January 2012 and is Australia’s first harm prevention charity dedicated to the problem of online hate. We not only get hate removed, we also make the social media companies accountable and recommend ways they can improve their effectiveness in preventing and more rapidly removing hate. Your support, by liking our page (https://www.facebook.com/onlinehate), encouraging others to join us, and donating to support our activities, are what make our work both possible and effective.

This briefing is in 5 parts:

1. The history of “The Untold History”

The page is no longer online, but the road to get to this point was full of twists and turns

2. How to report the page

Please do this if you do nothing else

Once you have reported the page, also reporting posts will help to get the page removed

4. How to report an image

Most of the hate content is in image form. Reporting them will also help get the page removed.

OHPI’s CEO, Dr Andre Oboler,  is a leading international expert on Antisemitism and Holocaust denial in social media. This section provides some background on the topic of Antisemitism and Holocaust denial on Facebook.  OHPI has had significant success in the past, but it has taken considerable effort. We hope Facebook will remove this hate page without the need for an extensive campaign. The content, as shown in the next section, speaks for itself.

6. Examples from this page

This section provides examples of some of the images found on this hate page. This both documents the nature of the page, and allow you to click the clicks and report the images as described in section 3.

7. Media coverage of this issue

The History of “The Untold History”

The original “The Untold History” Facebook page (page ID# 354953651282010) was opened on March 20th 2013. A campaign by OHPI led to Facebook closing a whole series of fake accounts (and the real account) of the administrator of the page around the 9th of October 2013. The page was unpublished as a result. The Administrator responded by reopened the page and using it to promote 22 new antisemitic pages they created in “retaliation”. On October 29th 2013 the page was permanently closed by Facebook.

OHPI will remain vigilant and work to ensure any further creations of this page are removed equally swiftly. If you see a new version of this page, please message the OHPI page on Facebook (www.facebook.com/onlinehate).

How to report the page

2. Click the down arrow at the top of the page (next to messages) and select “Report Page” 2. Select the option “I think it shouldn’t be on Facebook” and press continue 3.  Select “Hate Speech” and a drop down box will appear, select “Targets a race or ethnicity” from that box and press continue 4. Tick the box at the bottom that says “Report to Facebook” – this is NOT ticked by default, despite the fact you started this process by saying you wanted to report something. OHPI believes Facebook does this intentionally so complaints don’t get filed. Once you have ticked it, you can click continue.

5. Your report has now been filed, and you can click okay to end the process

You can also report individual images on the page. Reporting the images as well can increase the chance of the page being removed.

1. Move your mouse to the top right corner of the image and a small down arrow will appear. Click this arrow. 2. An option to “Report / Mark as Spam…” will appear. Click this option. 3.  The image will vanish and be replaced with some text thanking you for your feedback. At this point you have NOT reported the image. You need to click the word “Report” in the text that appeared in order to continue with the process.

4. Once you have clicked report, this new window will appear. Select the Hate speech option. 5. A new drop down box will appear, select “Targets a race or ethnicity” and click continue 6. You will be presented with an “empty” message. As with the pages, the box to actually report it to Facebook is NOT ticked by default. You need to tick it in order to submit a report.

7. Once you have ticked the box, you can click continue

8. Your report has been registered and you can now click “Okay” to complete the process.

How to Report an Image

1. Click on the image to view it full size 4. Selection the option “Hate speech of symbol” and click continue

5.  The box to report it to Facebook is NOT ticked by default, make sure to tick it before pressing continue.

6. The image has now been reported, you can click “Okay” to finish

You can now report another image if you wish. A set of images and links to them are below, if any aren’t working it will mean Facebook have removed them. So long as they work, you can report them.

At OHPI we review a lot of hate pages. Due to our limited resources, we usually focus our campaigning on one type of hate at a time. Hate against other groups in society is then documented, filed, and the content reported without any public announcements or campaigns. Sometimes, however, we come across content that is so bad, it needs immediate attention and all other work comes to a stop. The page “The Untold History” (page ID 354953651282010) is an example of such content. It was opened on March 20th 2013, and had 788 fans when we first reported it on August 11th. By August 20th it was still active and had grown to 1186 fans.

OHPI’s CEO, Dr Andre Oboler, first coined the term “Antisemitism 2.0” in 2008. Antisemitism 2.0 was a danger not only because of the use of powerful social media tools that could spread anti-Jewish propaganda more effectively than ever before, but also because social media was creating a normalization of  hate. As Dr Oboler told the Italian Parliament, the ‘antisemitism 2.0 argument is that to hate Jews is no different to supporting the wrong football team’. Facebook’s position on Holocaust denial has been a specific concern for some time, and Dr Oboler first wrote about this in a seminal paper on Holocaust denial on Facebook in 2008. A recent report by Dr Oboler and Adv David Matas, published by the Israeli Ministry of Foreign Affairs as part of the Global Forum to Combat Antisemitism, highlights that this is still an issue and includes communications with Facebook on the subject.

Most recently, OHPI have had a wide range of antisemitic content taken down in response to our report “recognizing hate speech”. While ultimately doing the right thing, it took a number of hearings before the Australian Human Rights Commission to get there. The complaint was based on OHPI’s report and filed by the Jewish Community’s peak body, the ECAJ. This is a significant amount of work to get Facebook to do something that should be obvious to any reasonable person. We hope this new page, “The Untold History“, can be closed with far less effort. So far a number of complaints about the page and content on it have been rejected by Facebook.

Examples of hate from this page

Despite everything documented here, and more besides, this was Facebook’s response to OHPI’s complaint through the Facebook reporting system:

Please keep reporting the page, the Online Hate Prevention Institute will follow up with Facebook directly and keep pushing for this content to be removed. Your reports can help make this happen.