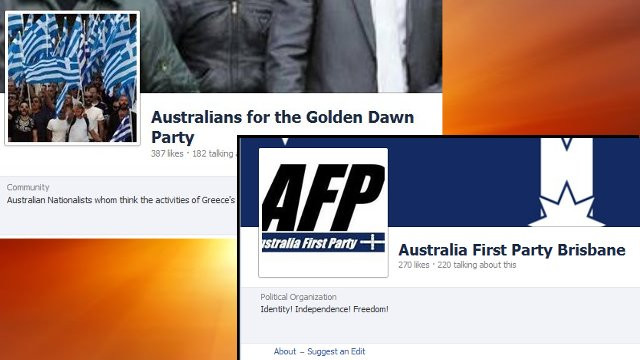 An update to this briefing is available here.

The rally was organised by Australia First Brisbane (on March 31, 2014) and supported by Australians for the Golden Dawn Party (on April 15, 2014). A day after the Australian Golden Dawn page posted the event, Australian First Party Brisbane announced on their website and Facebook page that “Members of Golden Dawn have confirmed that they will be attending this event”. This is social media connecting people and enabling the sharing of ideas. It’s unfortunate that the people being connected are racists, and what’s being shared is fascism.

The Online Hate Prevention Institutes believes technology companies cannot take an ethically neutral position to the way their service is being used. They should not permit openly racist organisations to make use of their services. This briefing highlights how the services of both Facebook and Google are being used to spread racism. We call on the companies to investigate the accounts referred to in this briefing and to close them for breaching the provisions both companies have in their terms service prohibiting the use of their platforms to spreads racism.

As for the rally, it was called to protest the arrest of Michaloliakos in Greece in connection with murder. It was poorly attended, and was largely overwhelmed by anti-fascist protestors, who decided to come out against the Greek Neo-Nazi party. Despite its failure, the fact that a public Neo-Nazi rally occurred in Australia is of serious concern. Even more concerning is the way this rally connected the Australian far-right to the far right in Europe. As a result of social media, we are not as immune to the problem of rising racism overseas as we might have thought.

Electorally Golden Dawn is one of the most successful far-right political organisations in Europe, having won 7 per cent of the vote in the 2012 Greek parliamentary elections. A briefing from the World Jewish Congress, however, describes Golden Dawn as “the most notorious of the resurgent neo-Nazi parties in Europe with its leaders using the right-arm Nazi salute at rallies and employing extreme, anti-Semitic and anti-immigrant rhetoric”.

The party is led by Nikolaos Michaloliakos, a Holocaust denier. The party has been associated with all kind of criminal activities: Violence, hate crimes, riots, hooliganism, intimidation, and murders. A third of the 18 Golden Dawn MPs, including party leader Michaloliakos, are in custody on charges of membership in a criminal organization and all of the Golden Dawn MPs have been stripped-off their immunity against prosecution by the Greek Parliament. Recently there have been discussions about banning the party in Greece.

J-Wire reported that the Australian Hellenic Council NSW Inc. responded with “alarm” to the news of Golden Dawn being brought to Australia from Greece. The Council described Golden Dawn as having “elements of a brutal and overtly racist ideology” and said it “comes replete with thuggish supporters burning torches, stiff arm salutes, bashing helpless victims and a dangerous brand of demagogue rhetoric that has its clearly-defined origins in Nazi Germany”. This was said weeks before the Brisbane protest.

Australia First (more formally, Australia First (NSW) Incorporated) is a racist far-right political party. According to financial returns with the Australian Electoral Commission, the party ran 14 candidates in the 2013 Australian Federal Election, of these only 2 candidates spent any money on their campaigns, and in total only 6 people donated money to the party for the election. The party did not win any seats. The party did, however, win a local council seat in 2012.

According to the Australian Electoral Commission the Registered Officer of the party is James Saleam. In a post on the Australia First Party Brisbane Facebook page he described himself as the party President. Dr Saleam earned a PhD from the University of Sydney for his thesis was on the Far Right in Australia. He also earned a 3.5 year stint in jail for supplying a shot gun used by skin heads to shoot at the home of the African National Congress representative in Australia, Eddie Funde, in 1989. Another two year term was earned for fraud. His links to the far right go back to at least 1975 when he was photographed wearing a swastika at a protest in Brisbane. He has also been vocal of his support for a White Australia Policy. The Good Weekend ran a profile piece on him on September 26/27 2009. Another profile can be see at FightDemBack.

The racism is not restricted to Dr Saleam. In 2007 racist material with the parties details on it was distributed in Sydney’s west. According to the Sydney Morning Herald, the material titled “African ‘refugees’ today, gangsters and drug-addled welfare parasites tomorrow” described African immigrants as violent and of low intelligence. At the time Dr Saleam said the party has a policy of “policy of total exclusion” and has “called for repatriation”. He refused to distance the party from the material but claimed it had been produced unofficially by a supporter. That claim was repeated after other incidents of racist material being distributed in the party’s name.

The initial connection between the Australian Golden Dawn page and Australian First Party Brisbane occurred just days after Channel 9’s “60 Minutes” program showed a member of Golden Dawn claiming the group had set up branches in Sydney and Melbourne. The broadcast of April 13, 2014, has been posted on YouTube by Golden Dawn’s New York branch under the title “Anglo-Judeo Propaganda Against Golden Dawn”. The comments are a mix of antisemitism and pro-Nazi commentary, and comments supporting Golden Dawn but denying it is a Nazi party.

Commenting on the 60 Minutes report, the President of the Hellenic Council NSW, Mr George Vellis, told J-Wire that “Golden Dawn’s attempt to introduce its disgusting brand of racism and hatred into Australia is not welcome and highlights how important it is for Australia to arm itself with strong educational and legal tools – including the existing anti-racism laws in the Racial Discrimination Act – to combat its extremist ideology and the ugly fascism that lies beneath”.

These pages pose a real threat to public safety and need to be taken down. They are platforms for hateful, racist propaganda to be expressed, shared, promoted and propagated. They are being used to reach out to ordinary people and make a fringe far-right movement appear mainstream. As the rally in Brisbane shows, what starts online can rapidly lead to events offline.

Australians for the Golden Dawn Party, GoldenDawnAustraliaMelbourne, and Australia First Brisbane are all examples of Facebook being used to promote a far-right agenda. Facebook should close the pages / accounts to avoid enabling the spread of fascism. They could also opt to close Jim Saleam’s account, although with only 5 friends, it’s doubtful that he personally makes much use of it – the Brisbane protest appears to be a special exception.

The Australia First Queensland’s website is freely provided to them by Google care of the Blogspot service. It is concerning that Google would provide this service to a political party that self defines as racist when their “content policy” clearly prohibits hate speech, and when they themselves define hate speech as “content that promotes hate or violence towards groups based on race, ethnicity, religion, disability, gender, age, veteran status, or sexual orientation/gender identity.”

Antifascist groups protesting against Golden Dawn are also gathering on Facebook, for example, Australians Say No to Golden Dawn (544 likes) and No to Golden Dawn in Melbourne (814 likes). These pages were used to call for the successful counter-rally against the Golden Dawn party. For those close to this issue, you may want to look into supporting these pages.

If you see social media page promoting racism, like the pages above, we urge you to report them. Hateful, racist propaganda has no place in social media. You can start by reporting the content below from Australians for the Golden Dawn Party and then reporting their page. See our instruction on reporting a Facebook post (many of these are posts, and it isn’t obvious how you do this), we also have instructions for how to report a Facebook page and how to report a Facebook image.