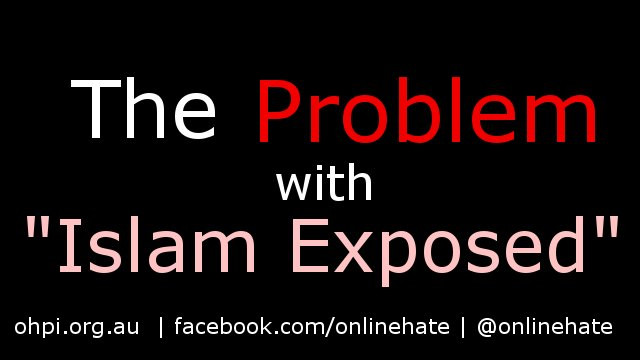 We have recently been recieving a number of messages from supporters of the “Islam Exposed” Facebook page who are upset that “Islam Exposed” is included in OHPI’s list of Facebook pages promoting hate speech against Muslims. The list is part of our report into anti-Muslim hate published last December.

The list in our report was compiled based on a systematic review of the Facebook pages concerned and mutiple examples of hate speech which we found on each Facebook page. In the case of Islam Exposed, 12 different examples were listed.  Most of those examples which we originally documented are still online.

Those who have contacted us also asked why we weren’t dealing with anti-Jewish content. This is a fairly common response from people who oppose OHPI’s work against the spread of online hate against Muslims.The question, however, shows a lack of research into OHPI. It is based on an assumption that we are either a Muslim group or a radical left-wing group of some sort. This is not the case.

OHPI is a Government endorsed Australian charity with a remit covering all forms of online hate. We do significantly more work on antisemitism than we do on any other topic. Our report into anti-Muslim hate is part of a wider program of work covering all forms of hate. Past reports, for example, cover antisemitism, hate against Indigenous Australians and attacks on the ANZACs and military venterans. This year we will produce reports looking at online hate against people with disabilities and online homophobia.

This briefing is in four parts: the first looks at recent content on the “Islam Exposed” Facebook page; the second part discusses why we included Islam Exposed in our report, it also explains why we use the term ‘Islamophobia’ in the title of the report, but not in our analysis and discussion – we agree it’s a poor term; the third part of the report highlights some of our work tackling the problem of antisemitism; the fourth part of this briefing provides some recommendations for those wishing to avoid hate speech against Muslims while still raising legitimate issues of concern. Parts 2 and 3 are adapted from a reply we sent to one supporter of the Islam Exposed page. In part 1 and 2, as is out custom, we have provided links which will allow people to report the content listed. We encourage you to report the content, and if you are an admin of Islam Exposed, we encourage you to consider our comments about this content and remove it yourself. The first example seeks to hold Muslims collectively responsible for the acts of an individual Muslim. The second holds up Muslim objections to Muslims celebrating the Christian holiday of St Valentines Day as proof Muslims are evil and against love. This is a form of demonization. It should be pointed out that Jewish groups have also opposed the celebration of St Valentines Day by people in the Jewish community, although some argue its celebration is permitted. Both posts are by a former Muslim, people who are converts from a particular faith are generally the strongest opponents of that faith. It was Jewish converts to Christianity that were responsible for much of the “evidence” which led to the creation of the blood libel, as we discussed in our recent report. Just because it is said by someone who was once a member of a particular faith does not make it acceptable. Nor is hate speech acceptable when it is from someone who is currently a member of a particular faith. The fact a terrorist claims to be speaking for Islam does not mean all Muslims share their views. The fact a few extremist Jews attend a Holocaust denial conference does not mean other Jews agree with them. This example seeks to incite fear and hatred against Muslim. It paints those going about the regular religious practise as a public danger. This example is listed in our report as G16, it suggest Muslims are deceptive and promotes a conspiracy theory that all Muslims wish to take over the world. While there is an Islamist ideology bent on taking over first the Muslim world and then the rest of the world, supported by groups such as Hizb ut Tahrir, as the BBC article shows, mainstream Muslims oppose this. This example is therefore also painting all Muslim as extemists. See this online and report it

We have just linked above to an example of a moderate Muslim speaking out against extremism.  Here’s another example where a Muslim speaking out against extremist is under police protection, and here’s an article discussing Muslims speaking out and the fact is simply doesn’t get the media coverage the extremsits get. Here’s another example. And another. And another. This one from 2011 shows that 46% of American Muslims felt Muslim leaders should do more to condem extremism (compared to 44% who felt they were doing enough). This image is hate speech not because it is untrue, but because it promotes the idea that there is no such thing as a moderate Muslim, or put another way, it argues that all Muslims are or support extremists. The image also featured in our report, as item G22.

Why Islam Exposed was listed

Islam Exposed is one of 50 pages discussed in OHPI’s report into anti-Muslim hate on Facebook. It happens to be the most popular page which is why it was also mentioned in our press release and information page about the report. The report itself is available at http://ohpi.org.au/islamophobia-on-the-internet-the-growth-of-online-hate-targeting-muslims/. The report includes copies of the various images (hundreds of them) which we examined across the 50 different Facebook pages.

Interms of the definition of anti-Muslim hate, and what does or doesn’t cross the line, this is discussed on page 8 of the report. The difference between anti-Muslim hate which is a human rights violation, and “defamation of Islam” which is a nonsense created by the OIC (and recently even they have stopped pushing that idea) is highlighted. We agree Islamophobia is a poor term, but it is what people will look for when researching this topic which is why we use it on the cover of our report, but not in the discussion and analysis. In the rest of the report we instead refer to “anti-Muslim hate”, making it clear the issue is about people not ideas. This is emphasized by the report’s subtitle “The growth of online hate targeting Muslims”.

Item A3 refers to Muslim as ‘barbarous people’, this is a classical form of racism, to refer to others as uncultured barbarians – this has nothing to do with religion or the beliefs of Islam. D4 and D5 compared Muslims to Nazis. On another page about Hamas etc this might be ok, on a page that is about Islam as a whole this is suggesting all Muslims are Nazis which is demonizing them. D8 promotes the idea that Islam is not a religion or a race but is rather a cult, and therefore attacking it is ok. It portrays Islam as commanding all non believers be killed and says this is the test of what makes something not a religion. This is far from true as almost all religions have passages that promote the same line, the Spanish Inquisition being a famous example. The point, however, is that this is an effort at demonization. F4 blames all Muslims for a terrorist attack, and attacks Muslims as people, comparing them to a “traitor ravaged hungry wolf”. G1 says all Muslims are liars and promotes media conspiracy theories. G2 vilifies Muslims, it describes a variety of objectionable behaviour and declared this is what all Muslims want. One of the people writing to us added, “I don’t see your group concerned with all the pages that promote hate against jews”. In fact 40% of all our work focuses on antisemitism. Most of our Board of Directors hold senior positions with in the Jewish community, locally and gobally and our CEO is an international expert in online antisemitism and co-chair of the Online Antisemitism Working Group of the Global Forum to Combat Antisemitism. The following is a short list of our content on the topic of antisemitism:

The following recommendations are provided to those who wish to raise legitimate issues of concern, without vilifying Muslim people.